Anyone in the lodging industry knows there are a million stories to tell, says Judy Cash, long-time owner of the Como Hotel, the chamber’s oldest continuous member.

To Judy, the stories focus on fond memories of some of the original owners and watching them help residents and travelers alike.

“The motel has been in the family since Bob and Margaret Cheatham bought it in 1956. It was originally owned by a man named Cole who built the Como. Bob took the 12-room motel and expanded it to 35 rooms,” she said. “In the beginning, Bob and Margaret lived on site and did everything themselves. They were an amazing couple who enjoyed 52 years together. I joined their team in 1971. Bob and Margaret were my children’s godparents but were more like grandparents.”

The Cheathams were active in the small Richardson community.

“Bob was a very strong man who had strong values and would always take the side of the underdog. He was a 32nd degree Mason and member of the Scottish Rite. He had a real heart for supporting children and was wonderful with them. He was a generous man who didn’t look for thanks when helping people,” she said.

The motel sponsored baseball teams and allowed people to come and swim in the pool during the summer months. “Back in the Jim Crow days, Bob was actually arrested for renting a room to a black man,” she said.

Reddit posters fondly remember playing on those Little League teams. Another lived there for six months after his father took a job with Texas Instruments.
“Ahh, the Como Motel. I used to live there. It was August 1960 when my dad moved the family from Cleveland to Dallas when he took a job at Texas Instruments,” the poster wrote. “We lived at the Como for about six months while my dad was getting a new house built for us. The place was fairly new at the time, and I remember my parents teaching me to swim in the pool; I was only two at the time.”

In his autobiography, Highest Duty, pilot Sully Sullenberger recalls his family staying at the Como Motel on Hwy. 75 when they travelled from Denison to Dallas in the 1950s, according to Texas Living magazine.

The Como would always fill up during the Texas-OU rival days when Central Expressway was just a two-lane road; you could cross to the other side with ease, said Judy.

“Many a homeless person has spent the night at the Como by the grace of our local churches, folks moving into town, out-of-town workers with local contracts, and folks whose AC went out,” she said.

“There are stories with happy endings as well as the sad stories that stay in your heart,” she said. “Some have been made into movies, others as jokes on the radio. The Como (which came from Cole’s Motel) has been around since 1955 and for those who know it, provides a quiet stay in a clean room. The little lady is 66 years old and we’ve watched Richardson grow,” Judy said. 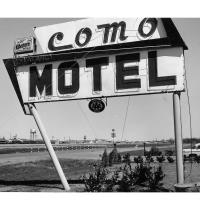