Citizen of the Year: Richard Ramey

Richard Ramey, former chairman of the board, is the Richardson Chamber’s 2021 Citizen of the Year.
While Richard’s “day” job is managing director for commercial lending at Prosperity Bank, his involvement in groups and activities benefitting Richardson and its citizens is a long list.

“When you think of things going on in our community, Richard always seems to be a part of it,” said Clayton Oliphint, senior pastor, First United Methodist Church.

Richard was born and grew up in Poth, Texas, a small town near San Antonio. He was active in all areas of academics as well as sports such as baseball, football, tennis, and golf; and graduated in 1971 with honors. He graduated from Southwest Texas State University, again with honors and while president of his business fraternity. While there, he met and married the love of his life. After a short stent in Midland in the oil business, they moved on so that he could earn an MBA in accounting and finance, and begin his 43-year career in banking.

He's involved with the Methodist Richardson Medical Center Foundation, the Boy Scouts of America, RISD Excellence in Education Foundation, Rotary and the City of Richardson, to name a few.

“When I think of Richard, I think of a great unifier,” said Keffler. “He’s been involved in so many boards that have added to the quality of life in Richardson. From the fruits of his work, we are truly a better community.”

Courtenay Tanner, RISD Excellence in Education, said that what make Richard a leader is “his ability to listen and to reason out what needed to be done.”

“He brings to much to the table: his ability, his insight; his thoughtfulness,” said Oliphint. “He cares deeply about this community. He cares about people.”

Listen to a chamber podcast with Richard and RCC President Bill Sproull about the state of banking since Covid-19. 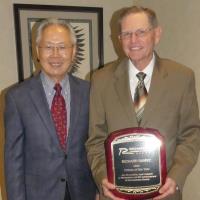